Late last year, the Boilermakers union, through its MOST safety and training trust, launched a program designed to fundamentally change the culture of the organization in the construction industry. The Boilermaker Code is our union’s commitment to elevating the attitudes and behaviors of Boilermakers to the highest level possible.

Of course, codes of excellence are nothing new; organizations of all types use them, and they can and do have a positive impact.

But when Boilermakers International President Newton B. Jones expressed his vision of a new code, it quickly became clear that the program would not only encourage the highest values of our trade, it would also dig deep into the roots of negative behavior from the past. This meant going back in time, to the 1970s and 1980s in particular, when union construction workers dominated the industry and, too often, behaved in arrogant and unprofessional ways.

To do this right, President Jones commissioned a documentary-style video to explore not only various types of negative behavior, but more importantly, the cost of such behavior: to the contractor trying to earn a profit, to the owner trying to complete a project on schedule and on budget, and to the Boilermaker whose ability to get future work depends on a solid reputation.

The decision to develop a code of excellence was welcomed by owners and contractors. Our partners in the owner community, especially, had encouraged the initiative at various tripartite meetings with the union.

President Jones didn’t want to sugarcoat the parts of our history that we’d just as soon forget. He made it clear from the start that the story would be told by those who experienced it firsthand, and if the language got a little rough, well, at least it would be authentic — and nothing our field construction members hadn’t heard before.

Over a period of some 15 months, a professional film crew and Boilermaker staff traveled across the United States and Canada interviewing veteran Boilermakers, including retirees, as well as contractors and owners. Many of those interviewed had lived through or even participated in job walk-offs and other negative acts, sometimes without much provocation — a frame of mind back then known as getting “the red ass.” Those being filmed were told to be frank about their experiences and memories, and they were. They were also frank about the high cost to the Boilermakers union in lost market share when owners and contractors had had enough of misbehavior on the job.

Those being filmed were told to be frank about their experiences and memories, and they were. They were also frank about the high cost to the Boilermakers union in lost market share when owners and contractors had had enough of misbehavior on the job.

Today that film, which won a Silver Telly award in 2015, is a central part of our one-day Boilermaker Code training program. It sets the stage for a 10-part presentation focusing on negative behavior such as late starts and early quits, job-hopping and absenteeism.

For each such behavior, the trainers (drawn primarily from a pool of highly-respected retired business managers) discuss the consequences in terms of lost work opportunities and lost revenue. Realistic dollar estimates are examined for owners whose jobs are delayed, contractors whose eventual costs exceed their bids, and members who are not invited back. Trainers stress to their classes that the penalty to Boilermakers involves not only lost wages, but it also means lost contributions to pension and health and welfare funds.

Designing the Code and Creed

To develop the Boilermaker Code and Creed, President Jones reached out to dozens of leaders in the Boilermakers union and to industry partners. A decision was made that each element of the code would be represented by one of the letters in the word, “boilermakers” to ensure familiarity and to remind members of what it means to be a union Boilermaker. For example, B stands for Brotherhood, R for responsibility and O for opportunity.

An accompanying 19-line creed builds on the code with statements that can be read at union meetings and other events, including training sessions. 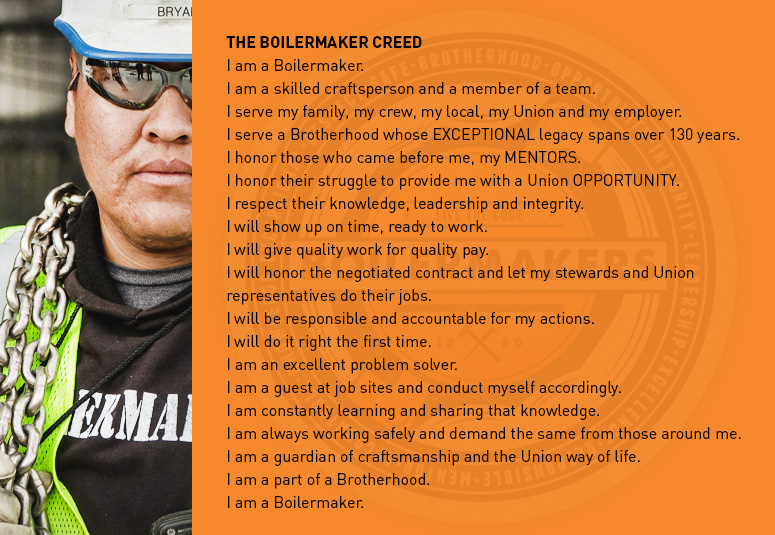 The code and creed are reproduced on banners, t-shirts and other items for distribution to local lodges and for use as signage at conferences. A new logo with the tagline “Live the Code” reinforces the messaging.

But recognizing that initial enthusiasm for a program of this nature can dissipate over time, President Jones reasoned that much more is required to make the code and creed part of the very fabric of our organization and to instill in each member its guiding principles.

To achieve that, the union, through the MOST trust, will require that every construction Boilermaker complete the one-day training in order to be eligible for an out-of-work list. Any member committing a serious infraction that violates the code will be required to take remedial training.

The Boilermaker Code program is still in its infancy. However, early feedback points to a positive reception by our members — both apprentices and journeymen — and the contractor and owner communities.

KCP&L/Hawthorn Maintenance Superintendent Joe Hegendeffer called the program “revolutionary in how the message is delivered and staged to change the culture of the Boilermaker craft as a whole.”

At a recent training session in Virginia, one journeyman Boilermaker summed up his impression of the Boilermaker Code as follows: “This class was a good thing for me to attend because it showed me my attitude was wrong. I got to thinking about the money I’ve missed out on with the pension and maybe put other hands in a bind for me not being there when I should have been there, much less [the cost to] the contractor on the job.”

Looking to the future, our union leadership is confident that President Jones’ vision — that the Boilermaker Code reside not only on a piece of paper but also in the hearts and minds of every Boilermaker — will be fulfilled. And we Boilermakers, and our industry partners, will be much the better for it.

More information about the Boilermaker Code and Creed can be found at http://boilermakercode.com.

This article was written by Dale “Skipper” Branscum, National MOST Administrator, and was previously published in the Spring edition of TAUC’s The Construction User.